Templeogue Basketball Club face a tough test this Saturday night when Men’s Super League newcomers Keane’s SuperValu Killorglin visit Oblate Hall for a top of the table clash. Both teams remain unbeaten after 2 games with Templeogue at the summit, closely followed by Killorglin, only points scored seperating them. The hosts have been boosted by the recent signing of last season’s Basketball Ireland Men’s Super League Player of the Year, Dee ‘Monsta’ Proby. The 6’ 10” Texan finished top scorer and top rebounder in the league, averaging 32 points and 19 rebounds per game while playing for DCU Saints. Proby, a former NCAA D1 player with West Virginia, will make his debut on Saturday night having trained with the squad this week.

Killorglin come off the back of 2 wins against Garvey’s Tralee Warriors (86-89) and Moycullen BC (81-64). American Pierre Newton has been their standout player with an average of 30.5 points per game. Looking ahead to the game head coach Ignas Šijanas stated: “We are really looking forward to this weekend. Everybody down here knows about Templeogue and the rich history they have, versus us being the new kids on the block. It should be a great occasion and we really can’t wait.” 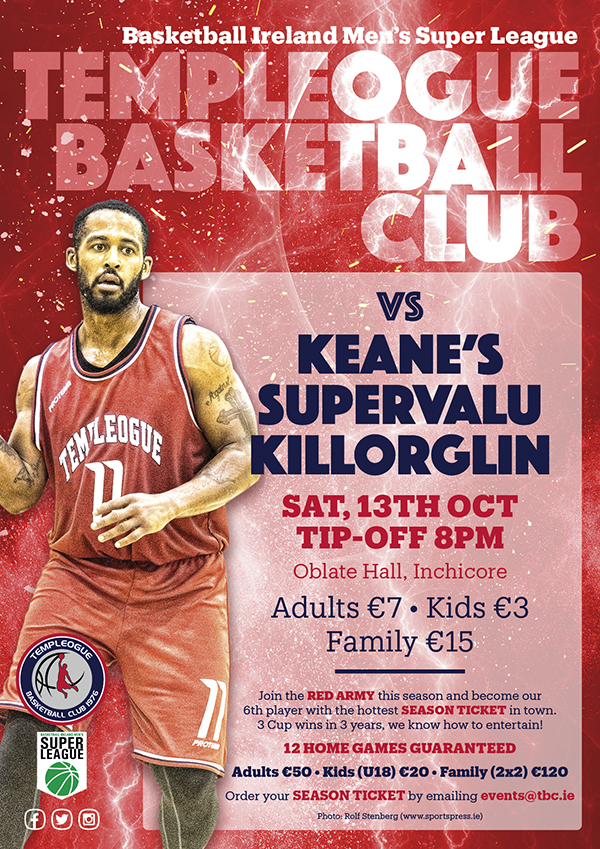 Tip-off in Oblate Hall is at 8pm and as always TBC’s Red Army will bring the noise… Let’s go Templeogue!!!

Season tickets are still available at the door or by emailing events@tbc.ie. Why not join the #RedArmy and become our 6th player with the hottest season ticket in town? 3 Cup wins in 3 years, we know how to entertain!