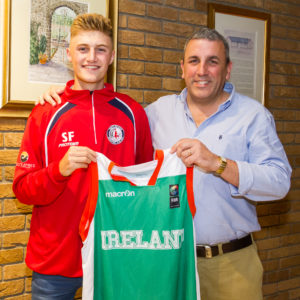 Templeogue Basketball Club would like to wish Sean Flood the very best of luck on his next basketball adventure, which begins on Saturday when he flies to Florida on a scholarship to NCJAA’s Santa Fe Saints.

Sean has been a major influence on everyone at TBC, especially the younger players who see him as a superstar and a friend. His professionalism and dedication to the sport he loves will surely carve out a successful career and one he rightly deserves.

Last season Sean was instrumental in TBC winning the Men’s National Cup for the very first time and played a starring role for Ireland at the FIBA U20 European Championships in Greece, finishing the tournament in the Top 5 PGs. Sean’s move to the US was under the guidance of another TBC player and Sport Dream Academy Director, Paul Cummins.

Although Sean will be greatly missed by everyone in the club we all wish him well and look forward to following his new adventure on the other side of the Atlantic with great interest.